For more than a decade Brock was a business editor and columnist at The New York Times. For six years he wrote that paper’s “Seniority” column and was the author of the “Off the Rack” media column prior to that. He has also worked as an editor and reporter for The Wall Street Journal, The Houston Chronicle and The Louisville Courier-Journal. He holds an M.Ed. from Temple University and a B.A. in English literature from Hanover College. He has taught undergraduate and graduate reporting and editing at New York University and Kansas State University, where he held the R.M. Seaton Professional Journalism Chair. He was a fellow at the Washington Journalism Center, with a concentration in public affairs reporting. He lives in Arizona, where he teaches at the University of Arizona and is a contributor to The New York Times and a featured speaker for the Times Journeys travel program. A member of the Authors Guild, he is represented by the David Black Literary Agency and AEI Speakers Bureau.

Brock, while pursuing conventional journalism and teaching careers, has been interested in UFO sightings and science fiction since he was in high school. He is a member of the Mutual UFO Network (MUFON) and has witnessed unexplained sightings in the U.S. and Europe. He has interviewed scores of witnesses to UFO sightings for both articles and personal research; he has read widely on the subject. All this is reflected in the authenticity of The Seven.

SECRETS is the third novel of the The Seven trilogy. 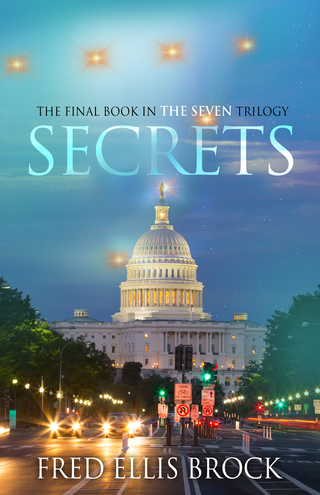 SHADOWS is the second novel in The Seven trilogy.

The first novel of a trilogy, THE SEVEN is a cross-genre thriller involving kidnapping, murder, and UFO conspiracies.